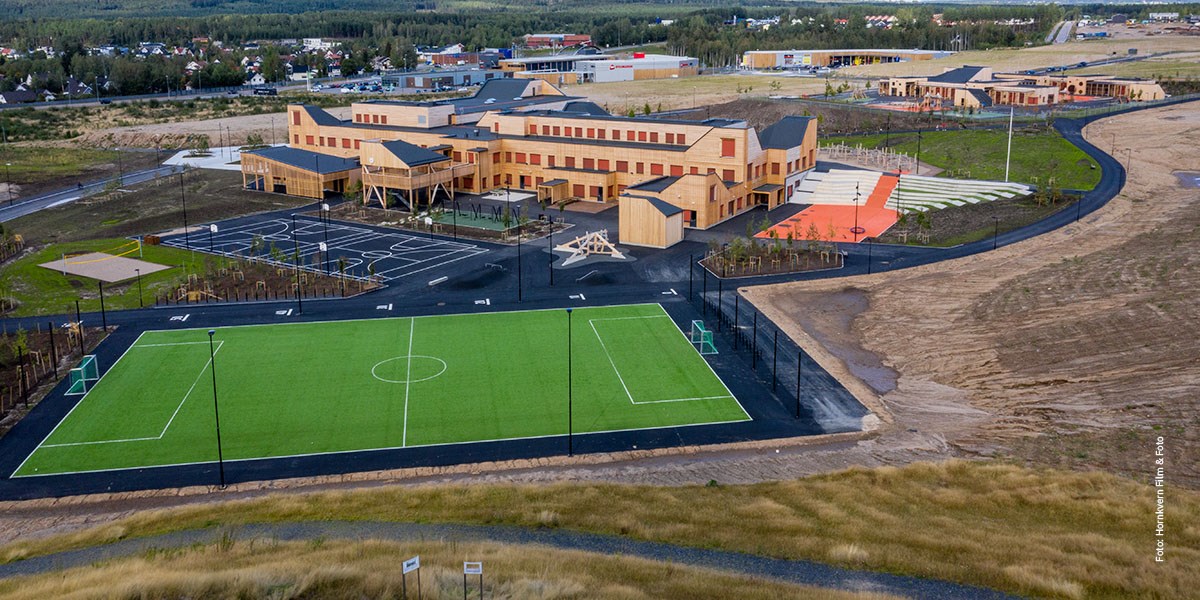 Elverum Municipality has seen strong population growth in recent decades, and it is now finding space for new residents by converting an old sand quarry into a new, climate-neutral district.

The district will be known as Ydalir, which in Norse mythology is a place on the outskirts of Åsgard where the god Ull lived. Ull enjoyed skiing and would certainly have been in favour of measures that limit emissions and global temperature increases. Ydalir is near the centre of town as well as the forest, and it has been designed around walking and cycling rather than driving. In addition to 700 residential units for people at all stages of life, there are shops and a separate nursery and school, which opened in the autumn of 2019. The buildings are state-of-the-art and very environmentally friendly.

The aim is to use future-oriented technology and materials, joined-up thinking and environmental energy and transport solutions in order to ensure Ydalir is at the cutting-edge of green development in Norway. Elverum Municipality and Elverum Tomteselskap AS are not the only organisations involved in the Ydalir project. The district and the buildings are a pilot project for the Research Centre on Zero Emission Neighbourhoods in Smart Cities (FME ZEN), which is jointly organised by the Norwegian University of Science and Technology (NTNU) and SINTEF. FME ZEN works to accelerate the decarbonisation of Norway’s building stock. Some of the topics on which it works include exchanging energy between buildings, environmentally friendly infrastructure and how buildings can be used as a resource in energy systems. Ydalir is one of seven zero-emission areas that the research centre will use as arenas for innovation and trials.

Developing Ydalir has increased the municipality’s  green expertise, created work for local and regional firms and, last but not least, helped to raise environmental awareness in the municipality. The forward-looking forested municipality of Elverum is inspiring others to think about innovation, green issues and efficiency – including smaller municipalities. Land use projects such as Ydalir are an important contribution on the road to a low-carbon society.

Land use and area projects