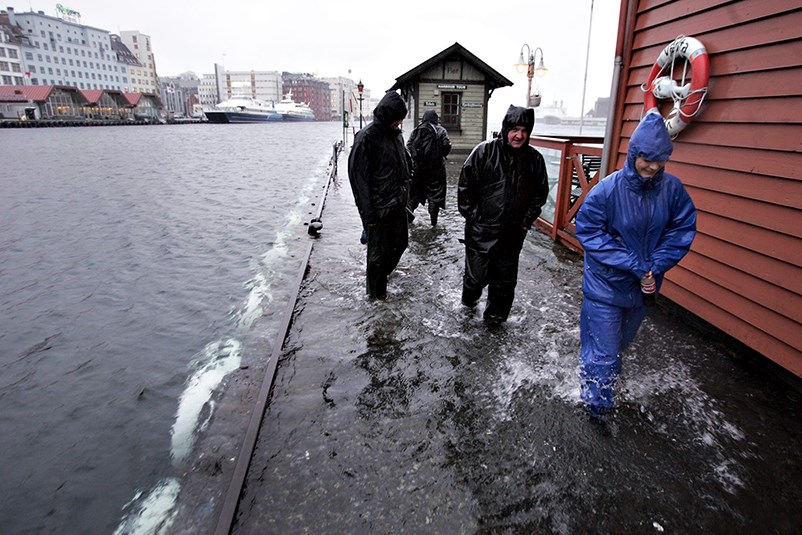 Climate change represents a growing financial risk, including for Norway’s municipalities. Risk prevention needs to be prioritised over repairs much more than is currently the case, but where should municipalities look to find good solutions?

And what can be done to create enthusiasm for spending money on preventing damage? These were some of the questions addressed at a seminar on climate risk at the local-government level organised by KBN and CICERO as part of the Evolve Arena conference in Lillestrøm on 6 December.

Municipalities’ buildings and infrastructure will be exposed to more extreme weather, flooding and stormwater runoff, and we are already seeing this happen. Although physical risk is only part of municipalities’ overall risk profiles, climate change adaptation will be of central importance and will require major investment. The ability of municipalities to deal with climate risk both in their daily work and in their long-term planning depends to a significant extent on the solutions they choose as well as the costs associated with them.

Climate change adaptation as an opportunity

Philip Thörn, the Head of Sustainability at If Forsikring, opened the seminar by sharing his experience of the climate change adaptation work being carried out by Swedish municipalities.

“The vast majority of Sweden’s municipalities are carrying out work in the area of climate change adaptation. However, we noted that even if some municipalities have successful processes and are working in a systematic and targeted way, seven out of ten have not made particularly good progress on this work”, commented Philip Thörn, who was involved in mapping which Swedish municipalities are the most successful at climate change adaptation when he was at the IVL Swedish Environmental Research Institute prior to joining If Forsikring.

Philip also emphasised that climate change adaptation needs to be viewed as an opportunity and not just as a cost. He pointed out that when parking spaces are turned into green spaces or banks are built up to protect against rising sea levels in a way that creates promenades, people do not think of such measures as climate change adaptations but as something new that has been created for them.

Erling Kvernevik, a Senior Advisor at the Norwegian Directorate for Civil Protection (DSB), discussed the fact that there is still much work to be done in terms of the public’s understanding of climate change adaptation and how the message that the measures required are intended to protect them can be better communicated.

“Norway’s municipalities need to ensure people understand that climate change adaptation is relevant to absolutely everyone. They need to communicate more clearly the fact that they are improving the water and wastewater systems in order to address the wetter and wilder climate, for example”, stated Erling Kvernevik.

Kim Haukeland Paus, an Advisor at Asplan Viak, took these comments one step further, calling for a torchlight procession in celebration of our water and wastewater systems, and emphasised that interdisciplinary collaboration is needed if we are to solve the challenges.

“Stormwater runoff is no longer an issue just for water and wastewater departments. Architects, landscape architects, town planners, the transport sector and many others are affected by stormwater runoff, and we all need to talk to each other in order to find solutions”, he commented.

Risk prevention rather than repairs

“If we had spent all the money that has been spent on cleaning up after extreme weather events on measures that prevented the risks from materialising, we would definitely have saved money”, commented Berit Bakkane, a specialist advisor at Nedre Eiker municipality.

She discussed the paradox that money can be found to pay for the majority of damage caused by adverse weather events, but that there is never enough money to spend on preventing the risks from materialising.

During the panel discussion, the topics that were considered included why getting organisations to favour preventing risks over repairing damage is challenging, the costs involved, and whether climate change adaptation has a communications problem.

“As the most important lender to the local government sector, KBN wants to help municipalities to have the best possible basis for their decisions when they are investing”, stated Lars Strøm Prestvik. He also discussed the fact that climate risk is high on the agenda internally at KBN as well. “We are going to incorporate climate-related figures into our credit assessment model because we believe it is a significant part of long-term financial sustainability”, he commented.

Alexander Berg from CICERO summarised the seminar and brought it to a close by explaining what climate-related risk actually means and how it will affect Norway’s municipalities.

“We wanted to highlight good examples of how municipalities have integrated climate change adaptation into their work. We also wanted to provide a sneak-preview of a brand-new tool we are creating for KBN that will help Norway’s municipalities to identify and work systematically on the risks associated with adaptation and on adjusting their targets and decisions”, commented Alexander Berg, Senior Advisor at CICERO.

All the speakers’ contributions are available in Norwegian: